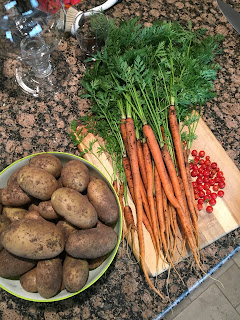 I should start by saying this post is from JANUARY, & I just realized I simply forgot to post it. Story of my life...so heads up I’m only 2mo behind! I promise it won’t take me another 2mo to post my next one as I have a newer update and will try to post that one in the next couple days...or within the next week;)... Here we are into 2019 and I’m pondering the realization that I did not discuss my urban garden veggie planting from the summer of 2018, nor did I show any pictures of my urban garden that yielded some great veggies and left me a little bit in the mood to continue to build some raised planters. Correction: left me wanting my HUBBY to build more raised planters;). I felt this hobby turned me into the young-elderly neighbour, and that’s ok with me because I am living a zero fu*ks given lifestyle at this point:), and there’s something so incredibly enjoyable about pulling your dinner right from your garden! If the suspense is killing you to know what else I grew, simply scroll to the bottom as my Hungarian banana peppers were one of my faves!
In all seriousness, kind of, I have been so MIA on here and truthfully I’ve missed it! I’ve become so busy doing so many other things but I feel at the sacrifice of the only thing I really enjoy doing and that which feeds my soul which includes blogging and connecting with others living a similar experience. I’m not a New Years resolution type of gal anymore because really the only major goal I have on my resolution list is: continue living. That’s it. I can fill in the days however I choose to and I am ok with that. I don’t need an epic bucket list type of day everyday like feeding a lemur in the wild, while doing yoga, and embarking on some epic mountain voyage only wearing one shoe or some random shit that is just more extreme then the next. Truthfully, it just exhausts me even thinking about it, and with full disclosure I had to google what a lemur was because I suck horribly at identifying animals. I feel I’ve discussed my lack of animal kingdom knowledge in some previous post but lord knows at this point as my memory is one thing that reeeaaaallly bothers me!! The basic animals I’m good with (cat, dog, bear, tiger) but throw in there any other thing (animal) and my brain just instantly throws that out of the memory bank. At this point my brain is trying to remember where I put my keys or did I take my chemo today?? I can’t fill my brain with leisurely animal facts. Anyhow, now I’m just rambling... Some days i’m just tired and want to do absolutely nothing. Nill. Then I feel guilty and get back into it and end up more busy then I'd like to be. At times I feel I give so much of myself to everyone else that I feel bad to just say NO, and so I continue say YES and guess what? It has brought me zero happiness, just increased stress. Cancer advocacy is also bloody tiring as well, thankless, emotionally draining and an exhausting area to get involved in. Add the terminal illness cloud looming over your head to the mix and it brings a whole new bag of emotions and difficulties. I constantly want to feel like I’m doing something to better the lives of those living with cancer, but at the same time I’m noticing my own life fly by while others in the same situation are out vacationing and enjoying their lives. Please don’t confuse not having children with not having a life!! Sometimes I feel as though others have come to expect advocacy out of me because I am doing “well” currently so I should be helping others. But here’s the thing, doing “well” is a very relative term. YES, I am “well” because I’m not actively dying and in hospice, BUT what has become so difficult with advocacy is just how different my brain is from even 10yrs ago. I mean, hello, this post is TWO MONTHS old & I finally just remembered to post it, lol. I have been on chemotherapy for almost FOUR YEARS straight! Thinking, attempting to memorize anything, takes on a whole new meaning. It’s HARD. And that is highly frustrating because I never used to be like this. So now, something as simple as volunteering, isn’t easy for me because it requires a lot of concentration, rereading the same shit a dozen times and still not knowing where I’m headed with it. It disturbs me and makes me feel stupid. I don't consider myself dumb (other than the animal facts I suppose) and I used to pride myself with always getting on the honour roll in jr high and high school, gold pencil awards in elementary, and finishing my university degree with distinction. Now, I’m lucky if I can get through a sentence or a story before my fleeting memory kicks in. People laugh and I’ll laugh but overall it’s not funny and just another thing this disease and its treatments have etched away at, taking away any known intellect I had left. 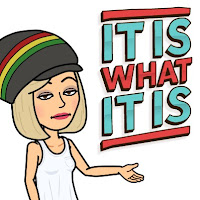 Healthwise I had scans right at the turn of the new year. I made that standard stupid top nine collage on insta for 2018 and I wrote some shit about how well 2018 treated me...wish I didn’t. January 1st came around and I spent it in emerg with my hubby....then back again on the 3rd. Both these times it had nothing to do with me but my hubby and his back. In between this time I also had my scans so between lack of sleep, stressing over the hubs and his health, and then throwing some imaging on there I was stressed, exhausted, oh and then also sick with some respiratory virus (self diagnosed) hacking like a chain smoker along with a fever. I didn’t bother calling in or going to emerg because frankly there was so much other shit on the go. I dealt with it and my fever only really lasted one day! Then one day I started getting this insanely intense pain on the right side of my chest. It reached a point where I needed to know the cause of it because it was affecting my ability to sleep along with affecting my ability to take deep breaths. Essentially, I broke a rib from coughing. Nice conclusion to a simple upper respiratory tract infection...totally just needed some more obstacles for 2019:/.  The day I had my brain MRI, I was going on little sleep, stressed and just tired. My brain MRI was at night so I made the brilliant idea to take my medicinals PRIOR to the scan and I would just have a nice, relaxing nap. Holy shit that did NOT happen. Long story short, I was visibly high when I got there (No, I did not drive but my lovely mom did, lol). My eyes were so blood shot and my mouth was so dry I felt like I had trekked the desert for days and needed water before the scan, lol. There was a vending machine so I thought thank goodness. I put my money in and went to press the picture of the water. It didn’t dispense. So I pressed it harder. Nothing!! At this point I was perplexed so I started pressing it repeatedly. Finally, my lovely mom looked at me and asked what I was doing to which I just turned because she heard about my dry mouth complaints, and she pressed the BUTTON under the picture which is the typical standard way 99% of vending machines work. I was so happy to get my water, whilst feeling like I cracked some mysterious code to get it. I was just really high people. There was nothing challenging to getting a bottle of water, other than my own lack of awareness.  Once I got called back for my MRI I was looking forward to having a nap. I laid down, put the ear plugs in, and then they secured that head contraption thingy over my head. As soon as I went into the MRI I felt panicky. I instantly knew what an absolutely terrible and awful decision I had made in regards to the medicinal consumption PRIOR to my scan. I couldn’t even open my eyes cause I was worried I’d panic. All I could think was don’t become the crazy person who wants out. So naturally I thought of ways to distract myself and the only thing I could think of in my time of panic was to sing the alphabet in my head. I kept singing it over and over and over. I think it was a bloody miracle I made it through without pressing the button for an immediate escape. 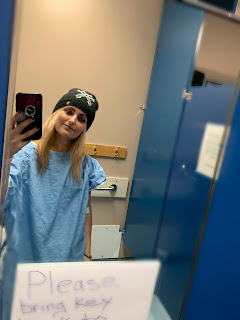 This is how you look getting scanned when you are CRAZY high!! Oh gosh, how my life has evolved or regressed?? I don't even know anymore
Essentially, my scans remained stable-ish for the most part! My sternum continues to be pesky with increased metabolism noted on the PET scan but all my other bone mets remain virtually asleep, while my brain shows nothing!! My sternum has been sore for a while and I can always radiate for pain relief but I like to use the radiation for unbearable pain and I am definitely not there so we will just continue to stay the course with my current treatment.  Since needing to slow down, to taking my hubby to his appointments & trying to care for him as well as myself, I’ve realized this year I MUST put MYSELF and my health FIRST and start to say no and not feel bad about it. I need to spend more time with my family. My husband. My mom. My brother. My nieces and nephews. It's time to realize life is becoming chaotic and I can't sacrifice my good days simply to please others. Those good days should belong to those I love the most. Here's to life slowing down a bit....


I'm sure everyone was scrolling to see the garden pics below , lol, so here they are: 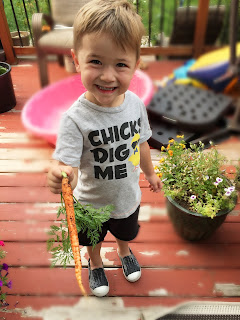 THIS boy is the same little boy I wrote a blog post about when he was born in 2015 and now he is a whole FOUR years old!!! He is my little garden helper, mini chef, smart, polite, & kind little boy. Honestly, he is a dream & I don't think I could ever sum up just how much I love him!! 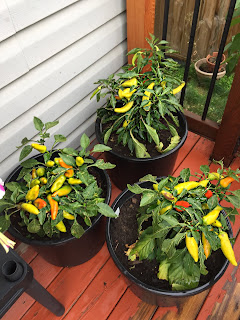 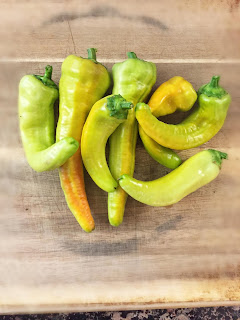 My Hungarian peppers were delicious and this was the first time they actually turned out well!!! Excited for the 2019 season to start:) 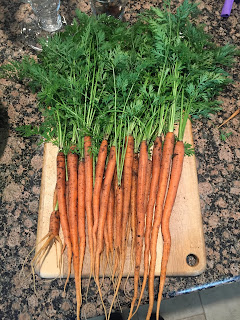 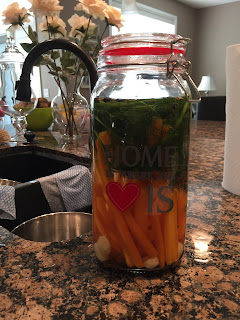 Pickled carrots are my go-to