My goodness the last week was busy to say the least. It started on Tuesday when Chris had his consult with ortho in the morning. Going into it I knew I had my consult with the neuro radiation onc in the afternoon, and then I would have radiosurgery the next day on Wednesday.

When we went for Chris' appointment the doctor told us he could do the surgery the next day. Wait, what? Honestly, how often do people have a consult with ortho only to be told they would operate the next day? It would have been lovely, except for the fact that I was to have this darn radiosurgery the next day. When he initially told us the surgery would be the next day we both just laughed because we thought he was joking. Nope, he was pretty serious. Thank goodness for our parents because we couldn't have done it without them! My mom became our driver and Chris' parents kindly took our dog so we would have one less thing to worry about. I'm so appreciative for having such a wonderful family.

In the afternoon I went for my consult. Firstly, I had radiation over two years ago to my chest and it was fairly straightforward. This time I was referred for radiosurgery which is radiation, but it's very high dose and precise. I mean 200 beams aimed at my head. Hmm.. that's slightly stressful because your brain is not exactly a place where you want small errors to occur. When I met with the nurse at the radiosurgery clinic I felt completely at ease. She was one of those people I felt like I had known for years, and had an amazing ability to make you feel like everything was going to be ok. She told us that I would need to be back the next morning by 7:30 to have a CT so that they could map everything out and then come back in the afternoon. The only problem with this was that Chris had to be at the private clinic for surgery by 7am and I wanted to be there prior to him having surgery. She told me how they have a fairly tight schedule and typically they can't adjust times, but that she would go talk to the people at CT and see if they could adjust it. Sure enough she came back and told me it would be no problem, and to just come back as soon as I had Chris sorted out. Now I know this may seem like something minor but it meant a lot. When we were already stressed and trying to sort out how we were going to get things done this news allowed us to breathe. Suddenly by being the patient I realized that it's the small things nurses do that can really make all the difference in the world.

After meeting with the resident and the radiation doctor they made the face mask which they would use during treatment to keep my head from moving. Firstly, the resident was nice, but very cut and dry. I don't know, but having someone tell me that my cancer seems to be very aggressive, and I'll likely have more "spots" pop up and whole brain radiation may be an option later on didn't sit well with me. I am very knowledgable about my disease and when you have metastatic cancer you want to have small victories. I don't want to feel completely hopeless, and to me this was just another hurdle to deal with and then move on. Now I can completely see how some people are just so much better at disclosing information. Dr. Webster has never made me feel like I was shit outta luck. I was actually happy when this resident stopped talking because I didn't care to hear any more of what he had to say. Don't get me wrong, he was nice but I really didn't care for his delivery. The actual radiation oncologist did tell me that on the bright side if there's a spot you want to get cancer in the brain that this was it! Since the location was far enough away from my optic nerve and brainstem I didn't need to get a head frame, yaaaay!! With a head frame they literally drill screws into your head, while being awake! I was ecstatic about not getting screwed in the head!

The next day, we went to this surgical clinic to drop Chris off. As I waited for him to go in, I was once again reminded as to why I left the adult world. The man in the bed next to Chris whined about utterly everything and this was pre-op!!! I had a pretty good guess as to how this man would be post-op. Once Chris was ready to go in I left with my mom to Tom Baker. Once there, I got an IV and went for a CT. This CT they did with the face mask. Once they put the mask on you can't open your eyes or move your head at all. For me, there's something kind of panicky about this. Obviously I didn't vocalize this, but to not be able to move or see makes you feel pretty vulnerable. I must say the radiation techs, the people in CT, and everyone else who was there were amazing. They talked me through everything, and were so kind.

Once the mapping was done I went back to the surgical clinic where Chris was already all done. Unfortunately, what was supposed to be a simple knee scope was slightly more complicated and Chris was told that he was non weight bearing for six weeks!! Now, the man in the bed next to Chris did create some entertainment for us as I had expected and I really did feel for his nurse. As soon as he got wheeled back he immediately started telling the nurse that he needed Percocet because he was in pain, "a warm blankie" (yup that's a direct quote), then he needed help to pee because he needed to void immediately. Ok, then I heard the nurse telling him that his new BP meds he was on may need to be tweaked because his BP was high. Once the nurse walked away, the man told his relative about how his BP meds may need to be increased because his pressure was still high. To this, his relative tells him, "well then maybe you should just pop two or three of those pills then." Chris and I just looked at each other in horror and it took every ounce of effort to not walk over there and tell him please don't try and adjust your BP meds based on trial and error.

Once Chris was ready to leave, my mom and I took him home and I went back to Tom Baker for radiation. Once there I took an Ativan, which I have never had in my life, because I just wanted to be relaxed. The pressure of knowing how much radiation was going to be directed at my brain was slightly stressful and I didn't want any possibility of flinching. Once the mask was on they explained that between each set of radiation they would do a scan to make sure I was still in position, and they are crazy precise when they do your brain, thank goodness. With this radiation the bed also moved, and kind of felt like a ride. We didn't go to Disneyland and I guess this would be as close as I would come. There was even part of the floor that would retract into the ground and all I could think of was that cirque du soleil show; O, because the ground retracts and fills with water. Everyone knows what I'm talking about, right?? I assure you I am still sane! Halfway through my lovely nurse came in and held my hand and talked to me. The entire experience was much better than I had anticipated. The staff at the radiosurgery clinic from my lovely nurse, to the techs, and everyone I came in contact with were absolutely amazing!! They didn't need to go out of their way to accommodate me, my nurse didn't need to come in and hold my hand, the lady in the waiting room didn't need to go speak with my mom and make her feel more at ease, however they did. I am completely grateful to all of them for everything they did, and for making this entire process so bearable. It isn't until you are completely vulnerable that you realize how much the little things people do really mean, and for that I am forever grateful.

After everything was done and I went back home I was pleasantly surprised by dinner on my doorstep by one of my amazing friends, Ashley (yes I feel people should get credit for the good things they do because it really did mean the world to me). As well, Lex had also dropped some things off that I needed and made my life so much simpler. Thanks to the well wishes from all my friends as well because it did mean a lot:) Overall, we made it through relatively seamlessly and now we are moving on, another obstacle overcome. What a week!! 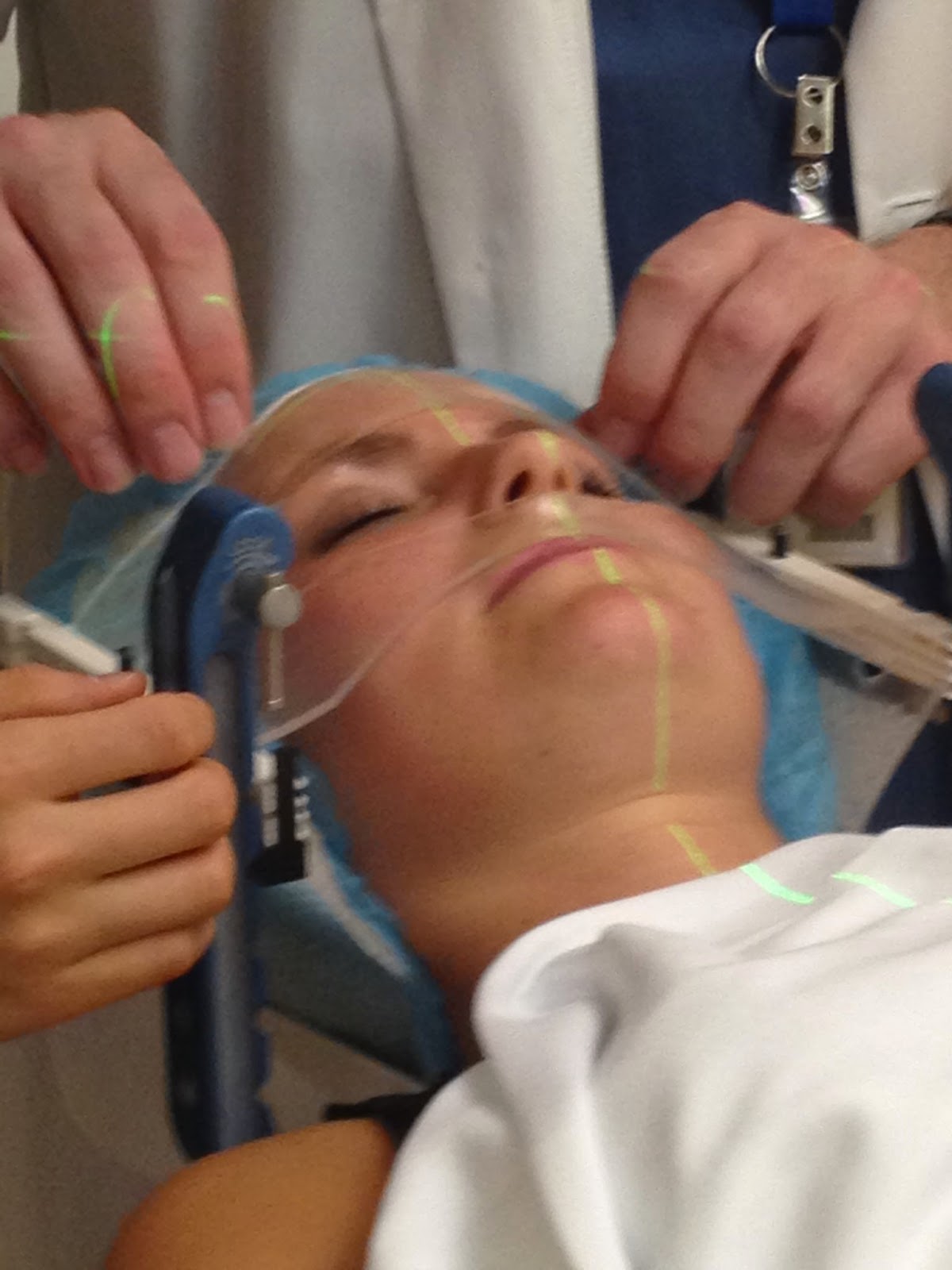 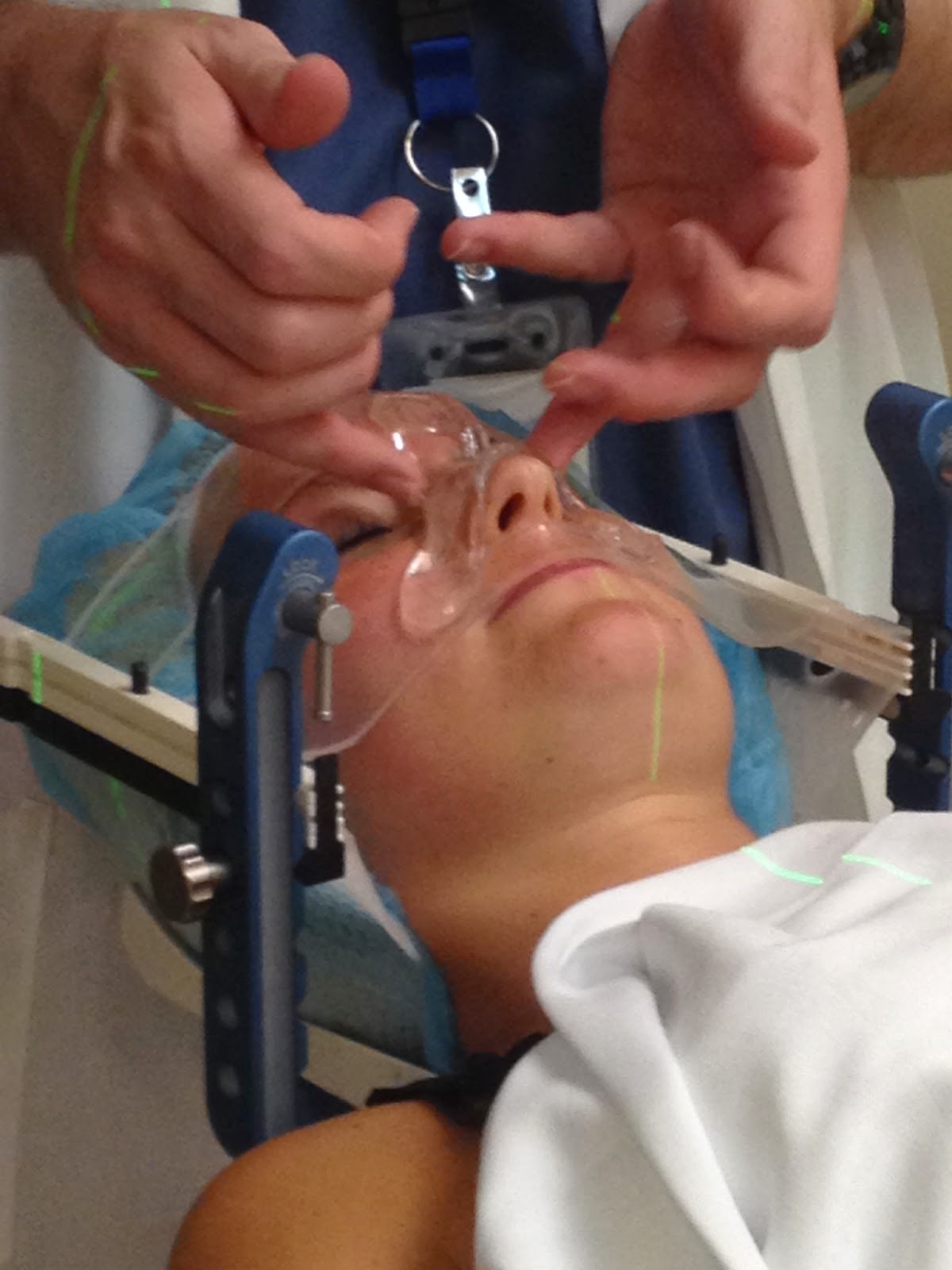 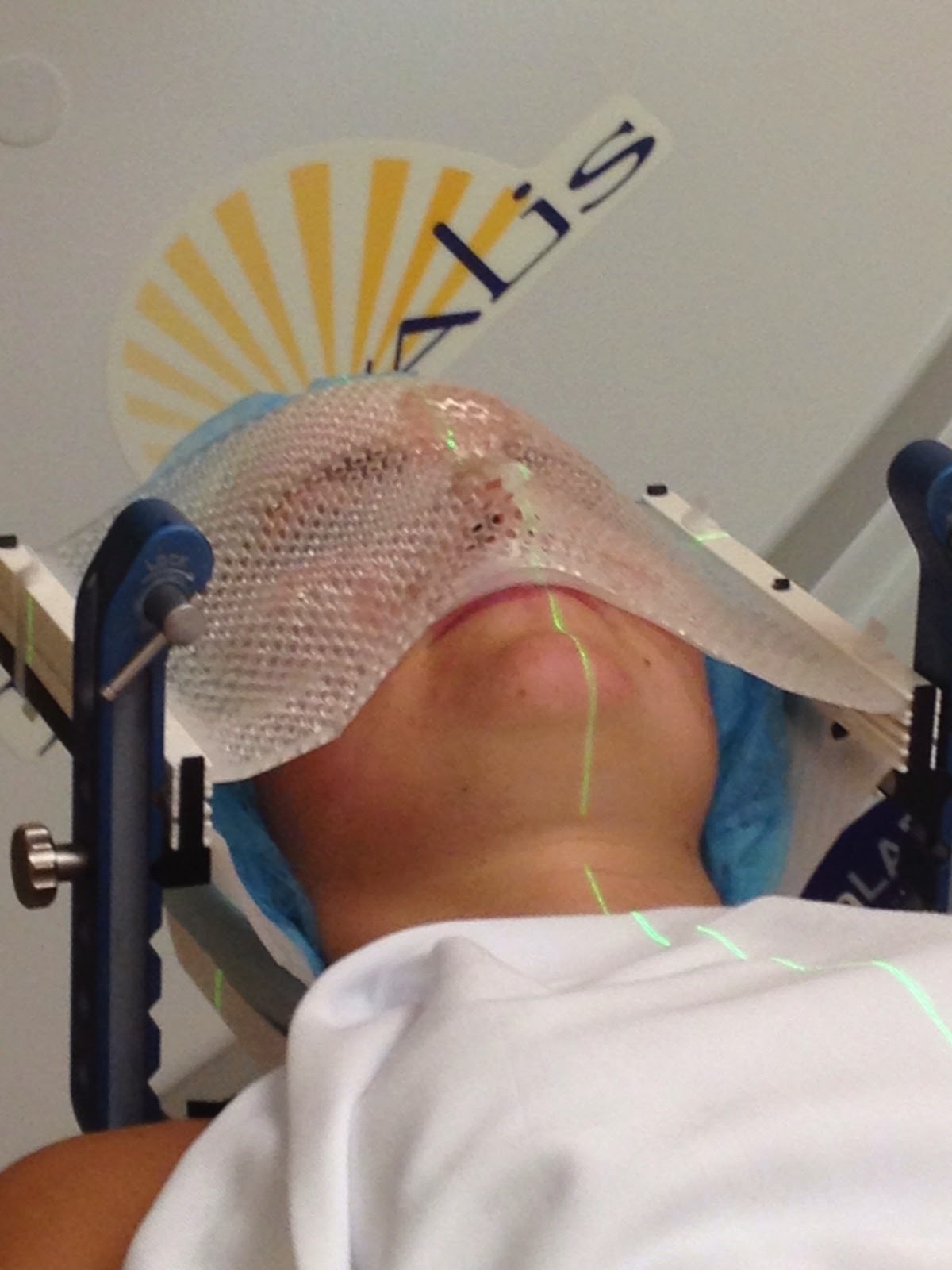 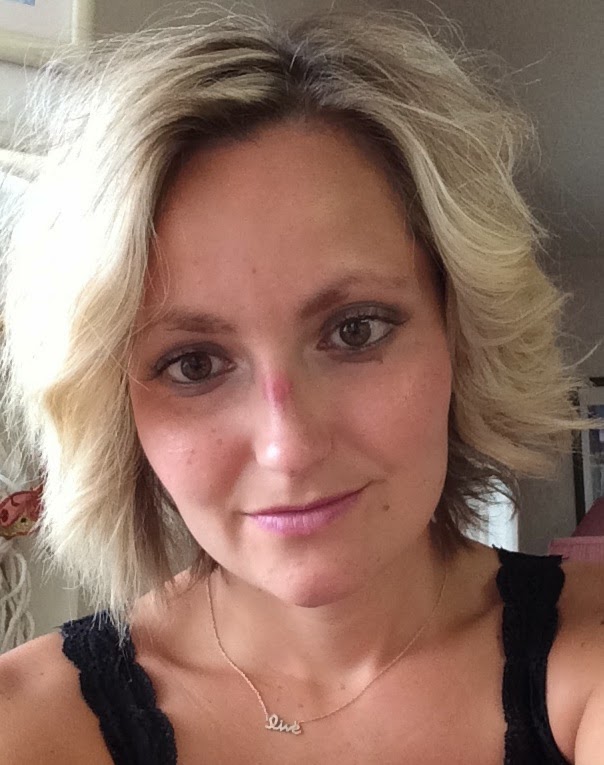 So the part that went over my nose got stuck when they pulled it off, and then I was left with a lovely bruise on my nose. They did tell me that that has never happened before! The lovely nurse did mention that I could sue them for this, hahaha 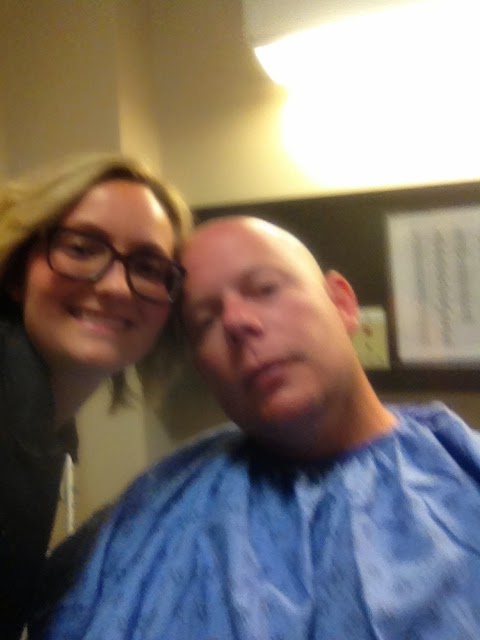 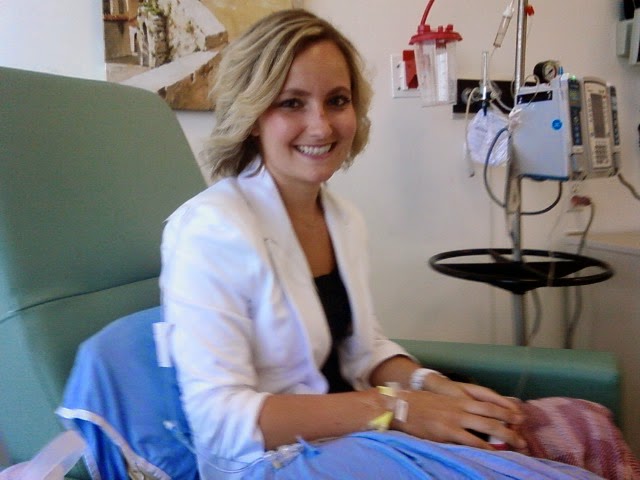 My week ended with my usual Herceptin infusion
Posted by The Life I Didn't Expect at 14:47