I felt privileged to have been picked for the LBBC (Living Beyond Breast Cancer) Hear My Voice Advocacy Training Program for 2016! LBBC hosts a conference every year in Philly for metastatic breast cancer patients with loads of info from new and up-and-coming treatments to breakouts in relation to simply living well with MBC. I was mostly excited to finally meet many of my metster FB peeps in person:).

My trip started off with flying down. Not gonna lie, but since being diagnosed with mets and realizing my body is like a darn treasure chest with the absolute crappiest of prizes, I was a little worried to fly alone. With MBC you really never know when shit will hit the fan, and the worst time for that to be would be thousands of kilometers from home, away from my family, and in the United States!!

Once I arrived in Philly it was dark and late into the evening, so I went to grab a cab. The kind gentleman quickly grabbed my bags and got it loaded into the cab. Once we were off we started talking. I asked about a neighborhood a friend told me to avoid and asked if it was really that bad and he stated, and I quote: "Even if you asked me to take you there I would never take you there." Ok, fair to say it's an area to avoid. He then proceeded to tell me how many cabbies had been shot to death that month and that everyone in the city pretty much packed a loaded gun:). Welcome to Philadelphia to this completely alone, clueless, cancery chick from Canada;). I appreciated getting to the hotel safe and sound and was ready to lock myself in the room for the night till my roomie Mandi showed up the next day.

I was so happy when Mandi arrived the next day. We had chit chatted frequently before meeting in person, and she was every bit the wonderful person I had assumed her to be, plus a wonderful roomie;). I loved going out with some of these lovely ladies in the evenings. One evening we went out and had some great food and then went walking back to our hotel. The streets were lively, people were out on the weekend enjoying themselves, and us ladies were happy and enjoying each other's company. Then one of my metster friends shouted out to a group gathered on the street: "we love your energy" to which we got a loud, "FU*# YOU." Hmmm...the city of brotherly love became a bit hostile, but the best was yet to come as us metsters stand our ground, and 'J' shouted back: "We all have terminal cancer you fu*%#n asshole." Oh, I so love these ladies:). As we continued to walk back we saw a random shop for psychic readings and it was only $5. We joked if we gave them $10 if they would potentially give us a better future, lol...we chose to keep walking.

The advocacy training was an educational and informative experience that helped empower me to give me the tools needed to further my advocacy work in regards to MBC. However, it was the other women and a man (yes, men get breast cancer too), whom all had MBC that empowered me to make my voice heard. What many people don't understand are these individuals were some of the most amazing people I have ever met in my life!! They were smart, strong, and insanely inspirational. We spent most of our evenings out for dinner, chit chatting, and laughing hysterically. I felt as though I had known them my entire life. This dreadful disease had brought us together and created a bond that I will forever cherish. You see, this conference and advocacy workshop helped to give me the tools needed to be effective in my advocacy work, but the people I met fuelled the fire within me to push myself to enact change because this disease suddenly became deeply personal. This wasn't just about me, but the many people I had met and laughed late into the nights with. My friends were dying and I would do anything and everything I could to help in any way humanly possible. I don't want any of them to suffer and I certainly don't want to keep watching my friends die. It's too much and insanely surreal to have to keep hearing about young mothers leaving behind their babies because of a disease that has not seen increased survival rates in over 20 years, while the rates of MBC in young women has actually INCREASED!! That's NOT ok!!

On the Saturday, the founders of MET-UP ("MET UP is committed to changing the landscape of metastatic cancer through direct action. We protest and demonstrate; we meet with government and health officials and researchers; we support research into metastatic disease; and we speak out against the sexualizing of breast cancer"), had organized a peaceful protest to essentially show the reality and the desperation of our plight. The weather wasn't exactly cooperating as it was cold and raining, but that certainly didn't stop any of us from walking the streets of Philly. Once there, numerous individuals spoke...remembered the many beautiful lives we've lost...and then many of us laid on the ground while a bell rang 110 times to indicate the number of deaths every DAY that are attributed to MBC in the United States. 110. If this number doesn't bother you then what will (I feel like a broken record saying the same thing over and over)?! The statistics essentially show that the number of individuals in the U.S alone that die from this disease every year is equatable to the number of deaths that occurred at the height of the AIDS epidemic: 40,000!!! As well, according to the Canadian Cancer Society, 14 women die from this disease every single day in Canada as well! Yet, much of the world is still living under some fabricated notion that breast cancer is "curable" and "beatable." Sadly, stage IV is NOT. Very little research goes towards studying metastatic breast cancer because it's just "too hard" to study. Where are the damn rebel scientists who say, "screw this shit I'm going to help these people." Someone PLEASE be that guy or gal!! We continue to die and nobody continues to care. I feel that when these lives are lost, those that feel we aren't worth the investment should be forced to look every motherless or fatherless child in the eye and tell them; "I'm sorry but your parent wasn't worth saving." Now tell me, who would do this? Nobody!!! But yet they are doing this in the most pathetic of ways by simply not increasing research funding, whilst sitting behind closed doors never needing to see those whom they are allowing to die and the families forever broken by this disease. I have learnt something as time goes on...people don't care about a cause unless it's personal. Until the CEO of big pharma's mother, wife, or daughter is diagnosed and the harsh reality sinks in; then, and only then, will they care and realize the urgency in our plight. It doesn't matter how rich or successful you may be in business; cancer doesn't give two shits about your socioeconomic status, and money sure as shit won't cure you. Our rogue cancer cells don't care about our pocketbooks, and it will ravage the wealthiest of people and leave them in the same boat as us common folks. Once you have mets it's a race against time...a proverbial clock in which you have zero clue as to when it'll stop. THIS is the most agonizingly difficult and torturous as fu*% ways to live. THIS is why we fight. Why we get angry. We aren't bitter, but we demand MORE. Our lives ARE worth saving and I can certainly say that the lives of my friends are most certainly worth saving...these men and women are not replaceable individuals and I refuse to watch them suffer while everyone sits back and acts like breast cancer is some type of sorority with an onus only on "survivors." We, with MBC, aren't survivors but rather we are the dying and sadly what I have learnt is that it takes a LOT of noise for people to even hear us. However, our voices are no longer whispers. We are united and stronger then ever. We are a vocal bunch that tweets (yes I am now officially on twitter too) and uses social media platforms to ensure we are becoming heard. We will not stop until we are heard, our demands are negotiated, and we are given a real fighting chance at actually "surviving." I will not stop until my friends stop dying. Period.

I took an insane amount of photos...sorry in advance... 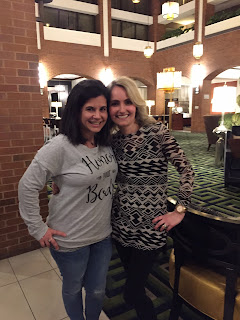 So lovely to meet the founder of Stupid Dumb Breast Cancer!!! This lovely is amazing in all she does for the metastatic community. XOXO 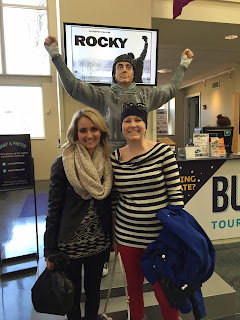 We were both tired and in a bit of pain to go to the steps where Rocky was filmed, so this had to suffice! 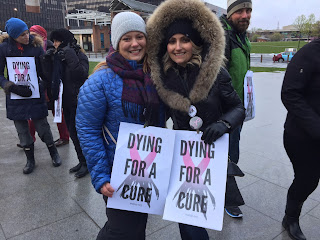 April I am so happy we met...She is simply amazing and such a sweet person!! This was at the Die-in. 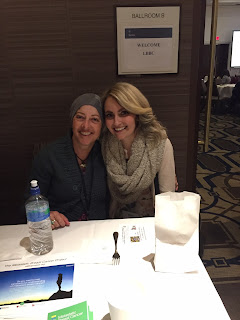 Laura...another lovely I feel so privileged to have met in Philly. 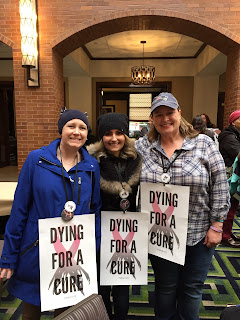 Mandi and Marci...Missing one other 'J' in this pic...but I simply adore these amazing women! 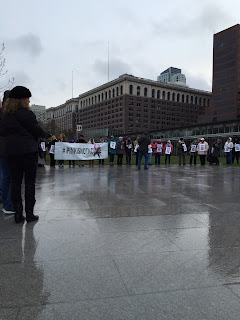 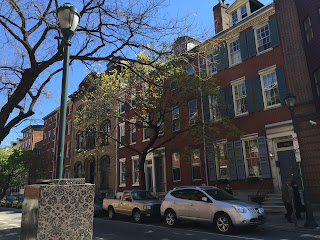 I love these houses!! So stinkin cute!! 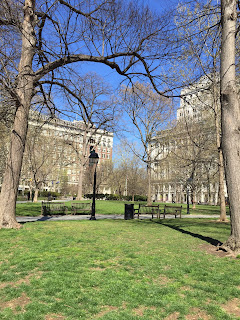 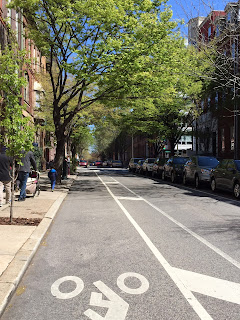 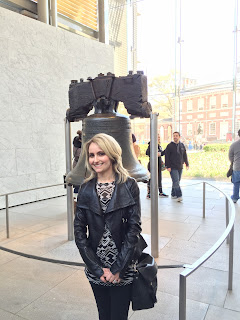 The Liberty Bell and me!! Surprisingly not as big as I anticipated it to be!! 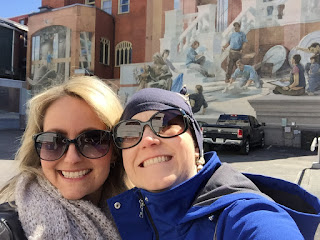 Love the art behind us!! 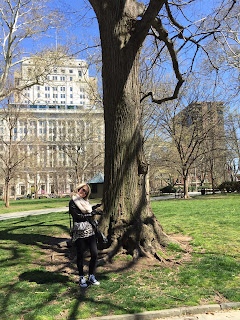 This is for my hubs;)...inside joke, hehe 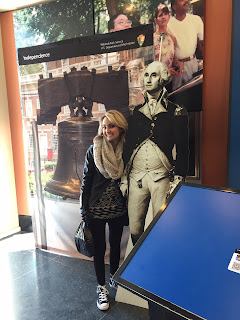 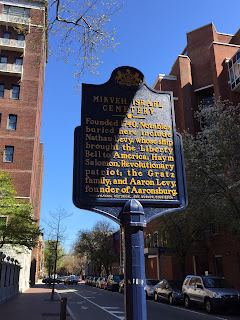 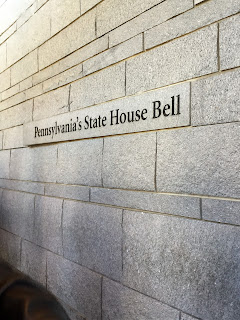 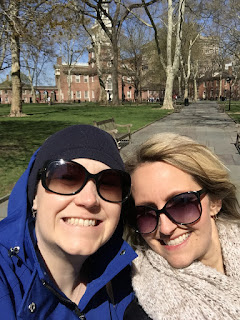