I had made high hopes for 2016, but it seems like things are crumbling around me. I went for my regular bloodwork before my next cycle of chemo. This is uneventful, simple, and I do it every few weeks. I've been checking my tumor markers more regularly then the every 3 months my onc had stated as I noticed they started creeping up again. I essentially kept checking until I got a lower number than the previous and now I'm blissfully ignorant as I ended it on a good note;). Cancer is a complete minfu*k!! This time when I checked in the lady told me where to proceed, where I sat down waiting for my blood to be taken. There was an elderly gentleman sitting next to me having his blood taken. I glanced at him, smiled, and sat down. He looked at me and then went on to proceed to tell the lab tech, "Be happy you're young and don't have cancer. I have cancer and it's so hard, and I don't get when these doctors send YOUNG, healthy people for bloodwork. They have nothing to worry about." When he stated the last bit he glanced over at me. Firstly, this collective ignorance by many "older" individuals has seriously got me upset. I looked at him and said the only words I could muster as I felt so ridiculously hurt by his judgemental comment: "ya cancer really sucks at all ages." Believe me I felt like completely going off, but I'm just sick of this collective mentality that having hair, putting a little effort into yourself to look half decent, automatically somehow equates to stellar health. Guess what: it doesn't!!! I would give everything to have been diagnosed with this disease when I was 80. Yes, I could have easily rebutted your remarks with; "You are so damn lucky and blessed to have grown old. To have gotten to grow old with your spouse, raise your kids, retire at retirement age, have grandkids, and maybe even great grandkids!!" That's what I wish I said because otherwise how can people learn when to keep their bloody mouths shut. Young people are not immune! I said nothing and instead sat there feeling like I was wasting people's time as I was "young and healthy." I shouldn't take this and after this last event I have decided I won't. Not ever again! If someone wants to be bold with their remarks, well then I certainly hope they're ready for my very BOLD response back;).

I don't get what on earth just happened to the month of January. I feel like this past month has been so unassumingly dedicated to heavy, sad, and overwhelming news. One of my closest friends, whom I have known since I was 5, was dealt a circumstance I couldn't even fathom. She had met the man of her dreams, and they celebrated their love by getting married just last year. I remember in August the pure joy they exuded. I can still remember telling my hubby how happy I was for her. She so deserved this beautiful person by her side because she had always worked so dang hard for everything she ever had. She did everything on her own. Never asking for handouts. Heck, never even asking her parents for help!

Then...the message that still makes me cry. At the time she couldn't speak, so she sent me a text message. I was out for lunch with my mom, after going for bloodwork, and I opened the text and couldn't believe what I was reading. The amazing man she had married only months earlier had passed away suddenly from a massive brain aneurysm. I honestly couldn't wrap my head around it. He was healthy. He was only 34. And he was a good, kind, thoughtful, and all around stand up man. Why??!!!!! In that moment I was numb. Numb over the fact that he was living, and living well, and then one day it was all over?? The thought of my beautiful bestie...the fact that she's a widow one month after turning 30!! How is any of this fair!!??? I look back on our childhood pics and wonder how our lives became so deeply rooted in tragedy. Why is it that others get to live, never experiencing tragedy or illness, and seem almost immune to it? While others have to get past hurdle after hurdle, simply treading away at life in order to stay afloat. Why do the individuals in our society who are delving into shady behaviour, and treating their bodies as a trash bin live into old age?? Of all these deaths these past couple of months I can honestly say they were ALL stand out, kind, caring, genuine, and beautiful people. I'm sorry, but nobody tell me it's "because God had a plan," or that it was "meant to be," or that those affected "will now find their purpose." NO! This is all garbage. Nothing good will come of my friend's spouses death other than never ending grief for his wife, and all those who loved him!! The sudden, unexpected nature of his death honestly made me question everything about life. I'm sick of people just letting their lives pass them by. Why don't you care??!!! Those that would give anything to live longer are shaking their heads as to why people don't value the life they're given!!!!

Then just a couple days after this my hubby called me from work (or so I thought he was at work) in the morning. The first words out of his mouth were: "Please don't panic." Oh for the love of God when you start like that I panic!! He was at work, and his laces weren't done up (yes, we will go back to the elementary days where lacing up your shoes was required, and I will remind him....actually I'm going to search for Velcro shoes at this point...the privilege of laces will be no more) so when he went to slide down the fire pole, he essentially never got hold of the pole. As in he fell 15 feet onto concrete, and the medics had to take him in to get checked out. The same medics who came out to our place to rehydrate me when I was really sick last year, lol. They're like the Saunder's family household personal medics!! Yup, I thought my heart was going to blow up. I instantly thought of my friend whose hubby had suddenly died and I was so scared!! Your mind always goes to the worst case scenario. I, along with the doctors, were shocked that he didn't sustain any broken bones. Like none!! They were fairly certain he would have had a broken foot, fractured wrist, fractured ribs, and fractured shoulder as he seemed to have landed on his side. He is unbreakable, and I was just beyond relieved that he was ok. How lucky he was he didn't land on his head...his back...people die from falls that high!! Then I thought of my lovely friend. Why couldn't they save her hubby...why oh why couldn't he be one of the "lucky" ones. I don't know but all of this was so mentally devastating. I like answers, and reasons for things happening. To me...all of it is senseless.

Due to all that has happened the past couple of months, I sometimes check out of people's conversations. I don't care about how you got stuck in traffic. Did you make it to your final destination? Yes, ok then you didn't die in an accident, sooooo who cares?? You're coffee was cold?? Yes....ok, luckily we live in 2016 where microwaves are readily available to heat it up!!! Problem solved. Oh, you spillt coffee on yourself? Shoot...however, have you heard of washing machines??? Problem solved. People... I'm going to admit something now. I don't give two shits about these issues that you claim to be "problems." These are FIXABLE, minor, day to day nothings!!!! For the love of my sanity just shut up!!!! Our society has become whiney and needy over the most unsubstantial loads of crap known to man!!! Think of the earlier days where wars were happening and people grew all their own foods, and had to WORK for everything. Then look at today. Yes, modern technology is great, BUT sometimes I scroll through facebook and think of the absurd, useless garbage that people post. I don't care to see what you ate, what you drank, what time you woke up at, and I don't care if you work out!! Wouldn't it be a nice surprise to wake up to a news feed that chronicles what good you did that day, or the one act of kindness you committed. I would much rather see that then the blurry selfie you post doing lord knows what as the only definable object in the pic is your big, ole head!! Have we become a society where every darn thing we do needs to be publicized, so that the most mundane things become something that should concern others??! I'm saying these things not to hurt people's feelings, but in an attempt to get people to just THINK. When did thinking become a difficult concept? Think about more than yourself. Think about some of the more pressing issues...as in BIG issues in the world. I'm not saying to donate to a cause even!! I just would love for people to be conscious of the things they say and to who they say it to. At this point in my life I must say that If verbal diarrhea is what you're going to spew at me I'll likely be thinking of whether my current chemo regimen is working....how much longer will it work for even...and the obvious of when you'll just stop talking and I can slowly move away from you before you tell me another story of how "hard" your pregnancy was. Yes, I surely couldn't imagine the "difficulty" of being blessed with the greatest gift of life because I would NEVER consider that a difficulty. I'm sorry, but if a healthy pregnancy is the biggest difficulty in your life then you must be a damn unicorn because you are the luckiest, and sparkliest person out there!!!

We never know what others are struggling with. The battles they're facing. Just when you think you have a grip on everything it's like this semi decides to come and roll right over you!
What happened to those days when my biggest, and most pressing issue was traffic? I know of many others who simply reminisce about all that could have been...all that we wished for...all that we lost. Next time, how about we all think of something other than ourselves.  And if you choose to focus on yourself, then please recognize the blessing bestowed upon you: LIFE. 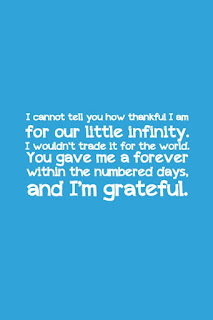