It has been an interesting few weeks. When I say "interesting" this means it has not quite gone as planned. Essentially it went to crap. My slight lack of appetite and thirst turned into an "oh shit 3 weeks have passed and I may be starving moment." I don't even know how to describe this other than oddly concerning!! Everyday that passed, I kept assuming that this sensation of feeling like I could simply hibernate with nillo reserve would pass. It didn't.

I must say that after three weeks of trying to consume Boost just to get calories, awful nausea, and limited oral intake, I was exhausted. I felt like I could barely keep my eyes open. It felt like this vicious cycle. Now the part to this that bothers me, and some may think it's insignificant, but this is simply what bothered me. I had made plans, and suddenly I felt like I was cancelling on everyone last minute. If you happened to be one of those individuals I am truly sorry. I hate ruining plans, but right now it's really hard to keep them, so I may be a little selfish in the coming weeks and retreat and simply take care of myself. I've realized as time goes on, that if I simply keep burning through reserves that I no longer have...well...I'll feel like complete crap and be miserable. I have enough of those days as is, so I would like to limit them any further if possible.

Then my feet literally went to craptown within 24hours. This lovely oral chemo we call Xeloda, DESTROYS your hands and feet, but I was surprised by the speed as to which it happened this time. It's as if the drug kept accumulating until one day my body said, "screw you," and voila just like that I was screwed! I've never had blisters and feet that hurt so bad. Truthfully, it was horrendous and that's when I stopped my chemo early.

On top of all this I had mentioned some hip pain that has worried me a bit. It's just this deep, aching pain. I suppose why it worried me the most is it had a resemblance to what my sternum felt like before being diagnosed stage IV. The pain at this point comes and goes, but I did NOT like how I would really notice it when I went to bed. Night pain & cancer go hand in hand which is likely why it made me mention it to my onc who then ordered an x-ray. Anyone who knows me knows that I think x-rays are fairly useless. Therefore, I wasn't in this urgent rush to get it done. Anywho, I got the req and forgot about it...that can be attributed to another lovely chemo side effect...thanks chemo I'm turning into someone who can't remember ANYTHING...it's bad. After over 7months on chemo I can officially say my memory is non existent...it's fleeting...it's not even comparable to the memory deficit I had when I was treated for my "early stage" breast cancer...oh no, this is far worse, lol. Sometimes when I write these blogs I have to go back to see if I've already written about it because I have this annoyingly fleeting memory (like I mentioned in the sentence above. I actually forgot I wrote it until I read back, and decided to keep this bit in, so you can appreciate what it is that I'm talking about). After a week and a reminder by my onc's nurse I went to get my x-ray. Sure as shit the x-ray showed something. WTF...absolutely not what I was expecting!! It showed a 10mm osteosclerotic focus. Ok, what this means is something showed on the x-ray, but we have validated nothing to certainty: Judit hates x-rays for this exact reason as well!!! It may be cancer but it might not be. This guessing game sucks!! I have never gotten a definitive answer from an x-ray, but rather always a hmmm... I'm really hoping it's arthritis or something not so deadly like cancer. Now I cross my fingers as I wait for my PET scan....hoping I don't illuminate anymore. Until then, the pain kindly reminds me of what I'm fearful of in the back of my mind.

After all this x-ray business I still wasn't eating. Therefore, I had to get IV rehydration. After 6 pokes of simply blowing through veins, and truthfully at one point I just wanted to leave and tell them I'd try to drink, very well knowing I'd likely just throw up. My hubby was NOT willing to take me home without getting fluids first. I suppose I scared him with my 'ungawdly' horrendous blood pressure, and my 'face' as he would later tell me, lol. Even after a single litre I felt ever so slightly, even a smidgen more perky. I wouldn't run to my car or anything, but my eyes were open!! That night I woke up three times due to extreme thirst. I was soooo happy because up until that point I never had any urge to drink! The next day I had my Zometa along with more fluids and some antiemetics. After that second litre, and the IV Zofran I felt pretty good. I managed to eat a bit more for dinner that day. After a few days of forcing more fluids I managed to get a litre in and I started getting hungry. This made me happy:).

My feet are slowly healing as I can now step on them without spewing profanities from my mouth, and I'm able to not starve to death as I'm eating and drinking!! The only reason I feel this way is because I was told to stop both my chemo and Tykerb...AKA: very effective meds, but will accumulate in your body and make your life a living hell. I get a minimum of two weeks off, but now I'm just crossing my fingers for good scans. I'd be lying if I said I'm not worried. These aren't yearly physicals, these darn tests literally determine whether I'm dying. They suck. They're overwhelming. However, this is the reality of living with metastatic breast cancer. Scan. Treat. Repeat. I want more. I, along with thousands of others living with MBC, want to be able to live life without the doom and gloom that hangs over our heads. I would love to go back to that time when I finished treatments for the first time. Where I moved on with my life in the most profound of ways, and truly relished in my life. I was aware of the fragility, but didn't require more toxic treatments. Life was so good!! I got married, loved more deeply, and went back to the best job ever. I valued my interactions with people, went to Antigua, and I LOVED every single second because I finally realized what was truly important in life, and what brought me the greatest joy! I so wish for that life again, but until then I'll do everything I can to educate the public, raise awareness for MBC, but more importantly I will fight like crazy to demand for increased research funding. I miss the "easy" life...AKA: my
life without cancer, BUT I have a sneaking suspicion that I will make the absolute most out of the life I have now been given. We all have a purpose in this world, but maybe I didn't quite realize what mine was supposed to be until now. Stay tuned...I don't want pity, I simply want the MBC community to be represented and finally heard. We don't need more awareness around early stage breast cancer, but rather more focus on the harsh reality of metastatic breast cancer. After all, it is the ONLY breast cancer that kills. 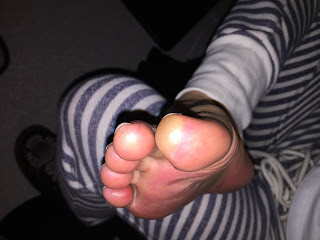 This was the biggest blister I had. It's a bit hard to see in the pic but this blister essentially made up the entire top part of my toe. To say severe hand/foot is painful would be an understatement...It's bloody horrendous!!! It literally affected my ability to walk. 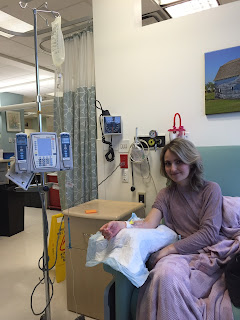 The only reason there is a smile on my face is because we finally got IV access!!!! 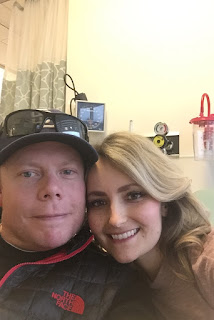 Honestly, this man is the most calming, loving, and wonderful advocate!! I've said it before, and I'll say it again, but I couldn't imagine any of this without him. Love you babes:).